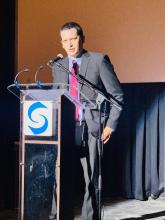 On August 14, 2019, the opening of the 5th Argentine Film Festival took place at the Red Carpet, Shangri-La Plaza. The Festival was held until August 17, with the attendance of over a thousand spectators and the screening of five contemporary films.

Within the program, the exhibition of Argentine photographs taken by Argentine and Filipino photographers between 2016 and 2018 was presented at the Grand Atrium of Shangri-La.